Primarily known as a “bush plane,” the de Havilland Beaver is distinguished for its ability to excel deep within territory where neither surface vehicle nor average pilot would venture lightly. Conceived in the late 1940s, it was specifically tailored to meet the needs of civil aviation’s most remote outposts by providing unparalleled durability with more brute performance then anyone could possibly need. As a result, an overwhelming majority of DHC-2 aircraft still “work” to this day serving pilots, passages and freight in and out of locations most modern aircraft only consider in case of an emergency.

The Hangar 9® DHC-2 Beaver 30cc ARF is built with the scale RC pilot in mind who wants a giant-scale model that’s as versatile as it is realistic. Its impressive stance begins with a huge 110-inch wingspan, but you’ll enjoy great performance using just a 30cc gas engine. Construction is an evolution of Hangar 9 tradition where only the best materials in balsa and plywood are selected for use with our modern processes, form assembly, tab alignment rigidity and laser-cut part accuracy. The result is an aircraft in final form that has sacrificed the least amount of scale authenticity to achieve the best appearance and most especially flight performance.

With the DHC-2 you get all the benefits of scale realism with the least amount of effort and fuss. Genuine UltraCote™ covering offers a brilliant finish with a realistic sheen that’s simple to maintain. The seemingly endless corrugated sheeting replicated on the control surfaces is a convincing detail as are the painted landing gear fairings, radial cowling and multi-cylinder dummy engine. Access to the interior is through the front doors located on both sides of the fuselage. Radio equipment is neatly disguised with the alincluded cabin appointments such as pilot seats which are easily located and secured with simple magnets. Each wing panel connects to the fuselage over a sturdy aluminium wing joiner as well as a scale wing strut that’s airfoil shaped. The two-piece horizontal stabilisers are removable as well so that the DHC-2 is easier to transport, load and store.

Where the Hangar 9 DHC-2 Beaver 30cc ARF truly shines is in the air. With the flaps up or down, the overall handling is very responsive so no matter what speed others are flying in the pattern, you can set the pace with confidence. Of course Hangar 9 couldn’t offer a Beaver without a set of optional scale floats—sold separately. The charismatic compliment requires the Float Strut Set (HAN454512) and Floats (HAN4580) that are built to make your DHC-2 the talk of the lake. A great 30cc-class engine up front like the Evolution® 33GX (EVOE33GX) gas engine will provide short field takeoffs that will impress whether you’re at an IMAA event or float fly. As a result the Hangar 9 DHC-2 Beaver 30cc ARF is a beautiful giant-scale RC flying experience that’s practical enough to fly every day. 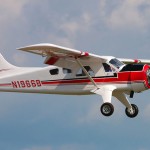 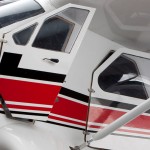 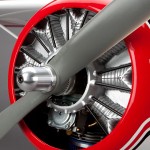 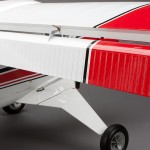 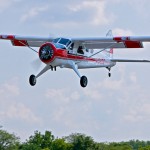 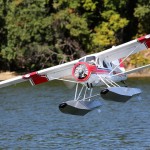