The North American Aviation T-6 Texan was a single-engine advanced trainer aircraft used to train pilots of the United States Army Air Forces, United States Navy, Royal Air Force and other air forces of the British Commonwealth during World War II and into the 1950s. Designed by North American Aviation, the T-6 is known by a variety of designations depending on the model and operating air force. The USAAC and USAAF designated it as the AT-6, the United States Navy the SNJ, and British Commonwealth air forces, the Harvard, the name it is best known by outside of the US. After 1962, US forces designated it the T-6. It remains a popular warbird aircraft used for airshow demonstrations and static displays.

This AT-6 is a highly detailed scale warbird constructed from ultra-durable EPO foam and has great presence both on the ground and in the air. Its vibrant and beautiful scale paint scheme is spot on, while the working split flaps and electronic retracts make it very functional as well! Additional scale details such as the treaded rubber tires, simulated cockpit gauges, air intakes and exhaust pipe give it a very nice touch.

In addition to the high level of scale detail, this AT-6 takes things one step further by including the Hobbyking Engine Sound Module System. This brilliant sound system produces realistic engine sounds that are proportional to the throttle position. The sounds are complete with engine startup/shut down sequences. This system really brings the model to life! Mounting for the sound system’s speaker is pre-moulded into the wing of the model making it super easy to install.

Being plug and fly, this model arrives with the servos, ESC and motor all pre-installed, this means you’ll just need to add your own battery and radio system. 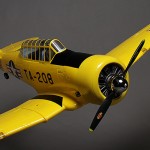 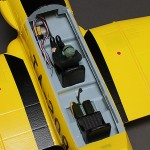 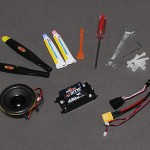 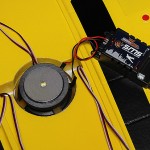 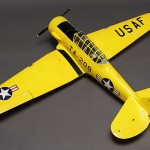